skip to main | skip to sidebar

PLAYING FOR THE OTHER TEAM -- From the Economist

"The next generation of transgender schoolchildren may have a better time.  Under a law passed this week, from January they will be allowed to use toilets and join sports teams according to the gender they identify with rather than the sex on their birth certificate.  The law's backers say it merely clarifies existing [California] protections.  Even so, it is the first such statewide statute in America, although a handful of other states have similar policies." 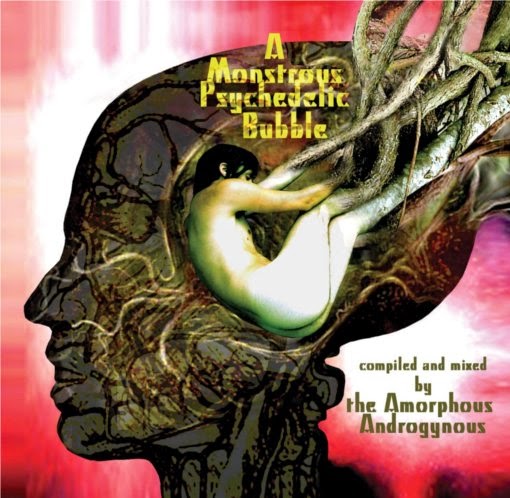 "Data on the transgender population are scarce; the Census Bureau does not ask about gender identity, and definitions are inconsistent.  What numbers there are suggest that anything between 0.1% and 0.7% of Americans have a gender identification that differs in some way from their sex at birth.  That could mean there are 30,000 transgender children in California's public schools, although not all will take advantage of the new law."

"Reports pain a grim picture of life for the transgendered; they are likelier to be unemployed, live in poverty or to attempt suicide than other Americans.  Yet attitudes are changing quick
ly, says Norman Spack, a paediatric endocrinologist whose Boston clinic has treated around 170 transgender pubescent children since 2007."
Posted by Martine Rothblatt at 7:45 AM 4 comments:

Posted by Martine Rothblatt at 7:09 AM 3 comments:

From an Apartheid of Sex to a Freedom of Gender

A Big Legal Milestone for the Freedom of Gender


EEOC ruling that gender-identity discrimination is covered by Title VII is a ''sea change'' that opens the doors to employment protection for transgender Americans.  Thank you Phyllis Randolph Frye, JD, Dana DeAndra Turner, Esq., and countless other transgendered pioneers and their advocates for speaking up, showing up and working hard on the side of progress.

Posted by Martine Rothblatt at 9:11 AM No comments:

The Beginnings of Gender Creative Children

The book, Transgender to Transhuman, explains that each of us has a gender identity as unique as our personality.  There are billions of people in the world and billions of unique gender identities.   Thanks to pioneering parents in Canada, and a trailblazing kindergarden in Sweden, the transgender future is starting to take root.

The Egalia Preschool in Sweden avoids shackling children into gender stereotypes.  "No Him or Her at Preschool."Male and female pronouns are replaced with a gender-free neologism when the gender of a person is undeclared.  The children are free to select gender identities without regard to anatomy and without the strictures of a male-or-female duality.

The Canadian parents have allowed their new child, named Storm, to choose one or more genders rather than be labeled as male or female.  Canadian Parents Raise Genderless Baby.

The media is incorrect to label the Canadians' efforts as raising a "genderless" baby.  Instead, they are raising a gender-free baby.  The opposite of male-or-female is not no gender, but it is creative gender.  We all have way too much gender to be forced into male or female pigeonholes.  It is a multi-gender, multi-sexual society awaiting us in the future.  One that is fun and full of creative choices.

As we leave gender duality, and gender conformity, we begin accepting a spectrum of gender, not an absence of gender.  Only the infinite shades, hues and intensities of an ultimate color wheel could label the gender choices before us.
Posted by Martine Rothblatt at 6:51 PM 6 comments: 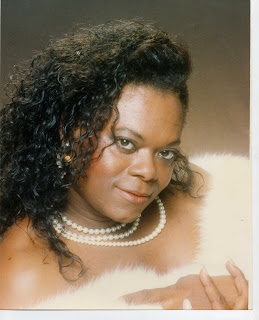 Dana Turner uniquely navigated the worlds of civil rights law, public theater activism and computerized research.  She was born October 13, 1954 in Gary, Indiana, grew up in California and graduated from Georgetown Law School.  After working at the Library of Congress she moved to New York City to practice law on behalf of the transgender and HIV+ communities.
She used her lively sense of humor, magnetic personality and strategic insight to pioneer the use of public theatre for civil rights activism.  This was famously achieved with her organization of, and starring in, the first ever Drag Show on the Mall at the 1992 March on Washington for Gay & Lesbian Rights.   She later starred for several years as the “Mz Liberty” persona on behalf of oppressed people in New York City Gay Pride events.
Her work for the International Conferences on Transgender Law & Employment Policy helped put the “T” in the GLBT alliance, as well as deepen its sensitivity to issues of race, class and gender.   Ms. Turner was an expert in online research, often finding key information that other lawyers missed.  She also served on the board of the World Against Racism Foundation, provided legal support to the Sylvia Rivera Law Project and starred in the award-winning 2006 documentary Cruel and Unusual about transgender women in men’s prisons, several of whom she represented.


Dana was admitted to Roosevelt Hospital in New York City on April 26th with atrial fibrillation and passed in her sleep at 4:11AM on April 28th .  Her warmth, charm and generosity created a large family of loved ones in Oregon, San Francisco, New York City and beyond.
A public visitation will be held at the Terasem Movement Transreligion Ashram at 2 Park Place, in Bristol, Vermont (30 miles south of Burlington, VT on Rte 116), from Noon – 1PM on June 19th, 2011, followed by a 2PM burial at the nearby Maplewood Cemetery in Lincoln, Vermont.  Donations in honor of Dana Turner, Esq. may be sent to the Sylvia Rivera Law Project, 147 W. 24th St., 5th Floor, New York, NY 10011, www.srlp.org.
Posted by Martine Rothblatt at 4:47 PM 4 comments:

This graphic signage blog does great honor to the Bathroom Bugaboo

When the law does bend and reform itself to eliminate the legal separation of people into males and females, what will become of sex-separate lavatories? Do not the genitals of a citizenry become a proper interest of the sate when it comes to exercising excretory functions in public buildings? Is not the public restroom, with its separate urinals for men and makeup mirrors for women, proof that the apartheid of sex is necessary?

Questions such as these were also raised when African Americans sought equal rights in the 1950s and 1960s. Ubiquitous “whites only” and “coloreds” signs hung in front of separate restroom facilities throughout much of the South. Many people were enlightened enough to share a bus seat but drew an apartheid line on sharing a toilet seat. 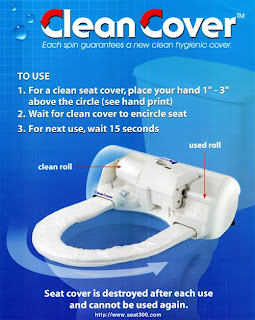 In fact there is no need for sex-separate restrooms, and this can easily be accomplished without violating personal privacy. All that is needed is to remove apartheidlike “male” and “female” signs from the outside and install only closed-door stalls on the inside.

Several quasi-legal objections might be raised to unisex lavatories:

• Persons with penises will be discriminated against by losing access to “quick and dirty” stand-up urinals.
• Persons with vaginas will have to face toilet seats wet with urine from “sloppy shooters” or those too inconsiderate or lazy to lift a toilet seat.
• There will be an increase in restroom rape by placing people of different genitals together in a place where their genitals are exposed.

Starting with the alleged discrimination against persons with penises, this problem can be resolved immediately by placing a certain number of stand-up urinals inside closed-door bathroom stalls. Yet a better solution, however, is to install only sit-down toilets in public lavatories. Each sit-down toilet is usable by all genitalia, whereas stand-up urinals are designed for only one type of genitalia. So, in fact, it is stand-up urinals that are per se discriminatory. As to the extra thirty seconds it takes to drop one’s pants and sit down to pee—this seems a very small price to pay to ensure equal access to all restrooms by all people.

Of course, some persons may be too lazy to sit down to pee, or even to lift a toilet seat, or to aim halfway straight, thus imposing a seat-cleaning or crouching obligation on the next stall occupant. The solution to this problem is education. From childhood we need to train all children that it is civilized to sit down to pee, as part and parcel of a sex-free education. 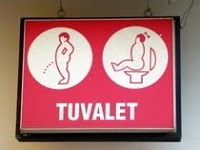 Today we train boys to stand up and pee as a sex discriminator. As every parent knows, the natural progression is from diapers to sit-down urination. Stand-up urination for people with penises is a way to say males are different (and better) in a patriarchal society.

A second possible solution is technology. Visitors to O’Hare Airport will recall that a push-button device on all toilets automatically cleans the toilet seat and dispenses a sanitary seat cover. Simple signs in front of each toilet, reminding the occupant to please sit down, may also be effective.

Restroom rape is a serious problem today, even with sex-separate bathrooms. It is pure speculation as to whether unisex bathrooms would increase restroom rape or decrease it by converting a “women’s space” attractive to rapists into a non-sexed public place. Generally rapists prefer seclusion. The thought that persons of any sex can enter any restroom at any time should discourage sexual violence in restrooms. 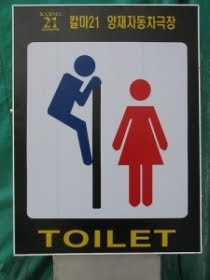 Heightened security, such as better night lighting, is one of the best tools to diminish rape. For about the cost of a single modern urinal, each public restroom could also be equipped with a continuous loop camera high above the exit door. This would have the same effect on discouraging restroom crime as when such cameras are installed elsewhere. If we place as much value on a person’s life as we do on a convenience store cash box or an ATM machine, then legislators should mandate automatic video surveillance of public restrooms. Legislation such as the Violence Against women Act (VAWA) sets a valuable precedent for spending federal money on facilities such as better outdoor lighting to enhance public safety.

The “bathroom bugaboo” presents no obstacle to the legal elimination of sexual apartheid. But today the law continues to enforce a separation of the sexes down to the urinal. In 1990 legal secretary Denise Wells was arrested in Texas for using the men’s restroom at a concert instead of waiting in a huge line for the women’s restroom. She was found not guilty by a mixed male/female jury and is now an advocate of “potty parity.” A dozen states mandate this feature in new buildings, ranging up to a required ratio of four to one female-to-male toilets in some California buildings. Laws requiring unisex lavatories on the European model, with adequate security features, would be less expensive to comply with and would also provide much relief to women faced with the indignity of long waits for a basic biological function. Such a change would also offer minimal consideration to dads out on the road with infants. Today the men face the insult of being unable to comfortably change their kids’ diapers in private, while changing areas are often “assumed necessary” in women’s restrooms.

The bathroom bugaboo is a legal problem because, as with race, restroom segregation reinforces social discrimination. It took laws to eliminate “whites only” lavatories. It took laws to mandate handicapped toilets. And it is taking laws to redress inadequate bathroom facilities for women. The best way to redress this harm, and to help cleanse society of sexual apartheid, is to pass laws that mandate secure, reasonably clean, unisex restrooms for all. 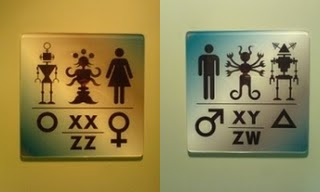 The new paradigm of a natural continuum of sexual identity provides a lot of work for lawyers in dismantling the old but omnipresent apartheid of sex. The elimination of sex as a basis for marriage, a label at birth, and a recurring checkbox in life will not come about easily. But the rewards are well worth the effort. Sexual identity lies at the heart of human expression. Eliminating the sexual shackles of today will spawn a revolution of gender creativity. All human beings will be able to live happier, more enriched lives.

Posted by Martine Rothblatt at 3:22 AM 8 comments: